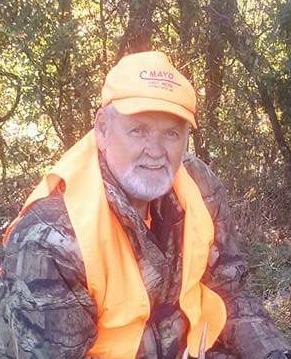 Bobby “Bob” Dwayne Napier, 68 of Prairie Grove, AR, went to be with the Lord at 9:30pm on Thursday, August 24, 2017 at the Willard Walker Hospice Home in Fayetteville,

Bob entered into this life on August 28, 1948 in Lincoln, Arkansas. He was a son of Orville Napier and Helen Jetton Napier. Bob was a Master Electrician who worked for the AERT Co. and was looking forward to retiring to enjoy his hobbies of fishing, hunting, playing golf, watching the Razorbacks and spending time with his grandchildren. Bob attended the New Sulpher Freewill Baptist Church and served his country with honor in the U.S. Air Force during the Vietnam Nam War.

He was preceded in death by his parents and one brother, Dennis Napier.

Visitation will be held at the Backstrom-Pyeatte Funeral Home of Springdale on Tuesday, August 29, 2017 from 5:00pm to 8:00pm.

Funeral services will be held at the New Sulpher Freewill Baptist Church on Wednesday, August 30, 2017 at 10:00 am. Reverend Randy Burris will officiate the services with burial being conducted at the Prairie Grove Cemetery under the direction of the Backstrom-Pyeatte Funeral Home of Springdale. To sign online guest book please visit www.backstrom-pyeatte.com

In lieu of flowers memorials may be made to a cancer research of choice.

To order memorial trees or send flowers to the family in memory of Bobby "Bob" D Napier, please visit our flower store.