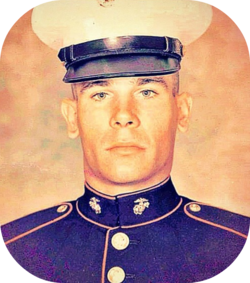 Donald Ray Springston passed away unexpectedly on Sunday, April 23, 2017. He was 66 years old. Donny was born in Springdale, AR on August 2, 1950. Donny was a decorated Veteran, serving two tours as a Recon Marine during the Vietnam era.

During the Vietnam War he earned a Combat Service Medal. He enjoyed being and working outdoors, hunting and fishing. He was an avid fan of Native American culture, art and history and he was proud of his Indian heritage and to be a US Marine. Donny was fiercely patriotic and loved watching westerns and was known as a practical joker with a big heart who loved his family.

Donny lived all over the United States during his life, enjoying the beauty of living in 48 different states. He was handy with a hammer and a saw, he always had a supporting hand and a listening ear. Donny had a generous and brave nature, he spent his entire life loving his family, animals and his country. He was loved by all and his laughter and generous spirit will deeply be missed.

Memorial service will be held on Monday, May 1, 2017 at the Backstrom-Pyeatte Funeral Home in Springdale, Arkansas at 2:00pm with Chaplain Mike Ford officiating the service, with Military honors to follow.

To order memorial trees or send flowers to the family in memory of Donald Ray Springston, please visit our flower store.