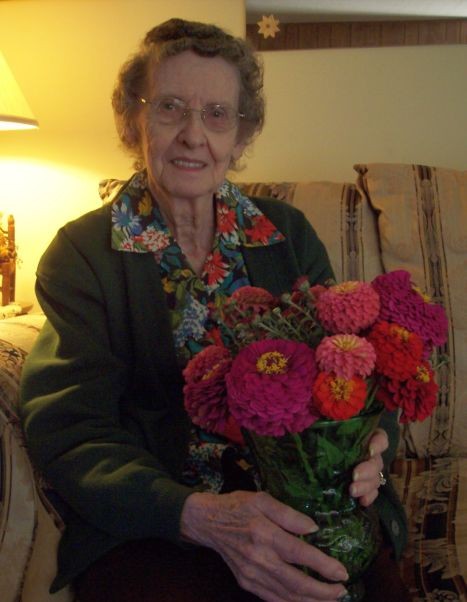 Lela Frances (Rich) Pendergraft, daughter of John Ab Rich and Pearl Mae (Rowley) Rich, was born September 21, 1925, on her father’s farm northwest of Lincoln, Arkansas, and departed this life to be with her Lord in Heaven on April 8, 2019, in Siloam Springs, Arkansas, at the age of 93 years, 6 months, and 18 days.

When Lela was only eighteen days old her mother died due to complications from childbirth.  Thereafter, three loving aunts, Lillie, Beda, and Luna Rich helped raise Lela.  She spent her childhood days enjoying farm life and attending Beaty School, a one-room district school near Lincoln.  As a teenager, Lela accepted Jesus as her Saviour during church services held at the Beaty schoolhouse.

In 1969, Alvin and Lela purchased a farm northwest of Westville, Oklahoma, where they raised cattle and poultry.  Lela worked as a homemaker, a substitute elementary teacher, and a dressmaker.  She was a member of the First Baptist Church of Westville.  She enjoyed gardening, sewing, and visits from her family and friends.

In 1995, Lela and Alvin sold their farm and moved to Siloam Springs, Arkansas.  There they attended Harvard Avenue Baptist Church.  Following Alvin’s death in 2009, Lela continued living by herself until age ninety-three.  In late 2018, she became a resident of Quail Ridge Living Center in West Siloam Springs, where she received attentive care from friendly nurses and staff.

Funeral services for Lela will be held at 2:00 p.m., on Saturday, April 13, 2019, at Backstrom-Pyeatte Funeral Home, Siloam Springs, Arkansas, with Pastor Tim Bailey officiating.  Interment followed at Beaty Cemetery near Lincoln, Arkansas.  Services were under the direction of Backstrom-Pyeatte  Funeral Home. Please go to www.backstrompyeatte.com to sign online guestbook.

To order memorial trees or send flowers to the family in memory of Lela Frances Pendergraft, please visit our flower store.